The Stranger You Know by Jane Casey 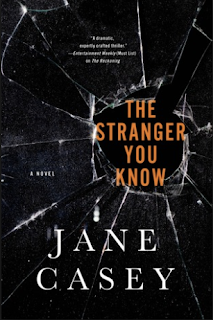 The Stranger You Know by Jane Casey

I'll start off by saying that this is probably one of the best books I have ever read, and I'm not just saying that. I really enjoy mystery books with cliff-hanging suspense, and this novel had it all. Jane Casey has written an amazing nail-biter that I am very glad I read. It kept me on the edge of my seat (or bed) and I just couldn't put it down. I finished it within two days which is quite the record for me. The characters are well-developed and most are quite likable. To be honest, I never expected this book to end as it did, but that's exactly what makes it a real thriller.

This novel follows Maeve Kerrigan, a police officer, on her quest along with her team to find the Gentlemen Killer accused of killing women in the most horrific way. This killer is known to not leave any evidence behind and is always one step ahead of officers and detectives. Kerrigan's dysfunctional team of officers makes the task of finding the killer all the more challenging.

Suddenly, evidence starts to mount against Kerrigan's partner, DI Josh Derwent but Kerrigan is having a hard time believing that Derwent is the killer, even though he is very self-conceited and has issues.  Kerrigan finds herself trusting Derwent, despite the pleas from her boss and her instincts. As some troubling secrets come up from Derwent's past, Kerrigan is having a hard time figuring out who to believe.

As the days go by, another women is found murdered but the team still hasn't solved the previous murders. More and more evidence piles up and it all points to Derwent, or so the team wants to believe. The description of the killer is an exact match to Derwent's personality, but Kerrigan still does not believe that Derwent is the murderer.

With Kerrigan watching her back from previous uncomfortable encounters, and trying to find the killer, will she ever accomplish the task? Is the killer from Derwent's past or is he the killer? To what lengths does the team have to go in order to uncover the truth? The truth will trouble you and leave you wishing the book never ended!

I don't think my review does the book justice because I have so much to say but I do not know how to put it into words. All I will say is that you have to read the book and comment below what you thought of it!

Reported Missing by Sarah Wray
In a Dark, Dark Wood by Ruth Ware
One of Us is Lying by Karen M. McManus