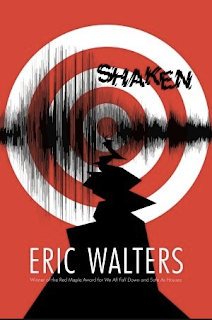 I've always enjoyed reading Eric Walters' books. They have been a pleasure to read because they're so detailed and descriptive! I really like the fact that most of them are based on a real life event. For example, Shaken, is a take on the devastating earthquake in Haiti, which was of magnitude 7.0 on the Richter scale!

Sixteen year old Canadian, Joshua Evans, has been very conflicted since his mothers death. His mother was such a kind and loving person whom always put everyone else first. Joshua loved her very much. When she died, things took a turn for the worse.

Joshua was always on the edge with faith, he sometimes believed there was a God and other times he didn't. His dad was a Preacher, or Pastor as many called him so Joshua thought he would disappoint his dad if he didn't believe in the religion his dad preached. There were many reasons as to why Joshua had considered there wasn't a God. The main reason was that, if there was a God, why did He take Joshua's mother, who had never caused harm to anyone. Why didn't God take someone else? When his mom fell sick, Joshua's whole family prayed and prayed to God that she would get better, but in the end she didn't. Joshua always wondered, no matter how much we pray, God will not listen to us, as there are so many other people he needs to listen to as well.

Joshua, his sister and father are part of a Church group and they have a mission to go to Haiti and help build a shelter for orphans to live in. These orphans have lost their parents due to disease, violence or natural causes. Joshua was reluctant because of the stories he had heard about Haiti, but more importantly he didn't want to leave home, where he was comfortable but not happy.

When they get to Haiti, Joshua is surprised at the living conditions that these orphans live in. He can't believe how happy they are even though they have neither parents or family. Still, in all this sadness, he makes a new Haitian friend named Phillipe and Phillipe teaches and tell Joshua all the things he has wanted to know about Haiti.

Joshua seems to be settling in well and the building of the shelter for the orphans seems to be going as planned, until disaster strikes.

What will Joshua do? Can him, his father and sister return home to Canada safely? Or will they be in danger? What heroic acts does Joshua preform? How can he communicate with people who don't speak English? Will he survive?
Posted by Unknown at 7:54 PM 2 comments:

Reported Missing by Sarah Wray
In a Dark, Dark Wood by Ruth Ware
One of Us is Lying by Karen M. McManus